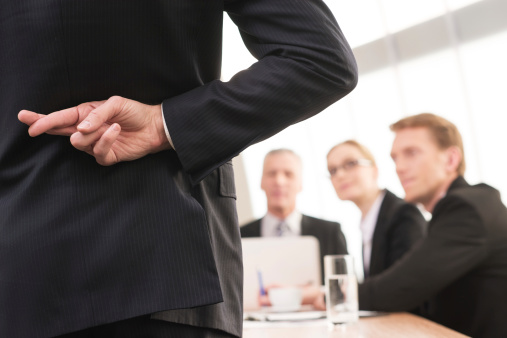 Detecting lies is crucial in business and life. Do you know if your coworkers really like your proposal? Do they like the job you did? Are they telling you the truth about the budget? Are they telling you all of their needs? Are the people you’re interviewing inflating their resume? And most importantly did your kids eat the brownies on the counter or did the dog?

Body language has long been used by law enforcement to determine if someone is lying. Their interrogations can be life and death matters. In politics—as with the people in your daily life—it’s often not as dire, but revealing the secrets hidden in plain sight can be very useful.

The vast majority of liars show certain characteristics that are dead giveaways if you’re paying attention. So the first rule in lie detection is to pay attention. Most people are paying so much attention to themselves that they’re not watching what’s going on around them. I always tell my audiences the same thing my cycling coach told me years ago. “Pay attention or you pay with pain.” Not knowing the truth can cost you lots more than you think.

The basic premise of body language interpretation is that the body can’t lie; words can lie, but the body can’t. Your job is to look for instances where body language and words don’t match. As trained as our politicians are, they still can’t shake this fact. Their movements are smaller and seem more natural, but they’re there if you know what to look for.

As an example, Bill Clinton stood behind the podium and said, “I did not have sexual relations with that woman,” as he nodded his head yes in rhythm with the words. This is a perfect example of when his words said no but his body said yes. You’ll see this quite frequently. I saw it when I asked my husband if he wanted rotisserie chicken for dinner!

What about detecting truth? That’s equally important as detecting lies. When people show you their palms, they are telling their truth. It can be different than the truth. You just have to know that’s their reality and it’s the place they’re operating from. Believe this the first time when you see it! It happens quickly and is very revealing.

Other signs to uncover lies include rolling lips in over the teeth and covering the mouth quickly with the hand. Lance Armstrong did this frequently when interviewed about his drug use.

The biggest factor the FBI looks for is significant shifts in behavior. Is someone usually still and becomes fidgety. Or are they usually quite animated and become still? Detecting this requires longer conversation with them than just a sound bite on TV. The most important thing is to not incriminate someone on one tell. An accurate assessment can only be made when you see several hot spots clustered together. When you get a hint that there’s a lie going on, just ask a few more pointed questions and the truth will reveal itself.

It’s one thing to read about body language and another to see it. Here are two tutorial videos and then a link to a few telling moments of Tom Brady’s Deflate Gate press conference.

The most important thing is to use what you’ve learned. Watch with new eyes and listen with new ears and you’ll see how the truth becomes much easier to detect.

Traci Brown trains associations, customer service teams and sales teams in strategic body language for unconscious persuasion. She’s the author of many books including, the Amazon bestseller Persuasion Point and Body Language Confidential. Go to her website to book her for your group or to see free videos on body language interpretation.